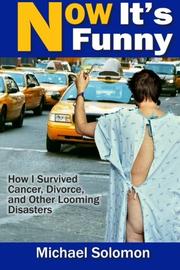 One man’s funny, bittersweet memoir of physical and marital collapse and rebirth.

When his doctors find a small smudge on one of 40-year-old TV production–company owner Solomon’s lungs during a routine physical, they at first discount its significance. Even later, after other tests, they’re professionally circumspect: “They describe things in dimensions and locations, and from these various ellipses you have to draw the picture yourself.” The picture is cancer, and before readers of Solomon’s engaging and ultimately redemptive (as he puts it, “I’m happy to be around to watch you laugh, believe me”) memoir have progressed very far into his tale, the cancer has metastasized. Solomon, in the middle of a strained marriage and trying to be a good father to his 6-year-old son, Luke, feels like “the protagonist in a cruel and bitter joke.” What follows this initial diagnosis will be familiar to anybody who’s ever known (or been) a cancer patient: an endless round of tests, procedures, CAT scans and catheters, all of which Solomon describes with a sharp clarity leavened by warm, inclusive wit. Solomon endures the horrors of his own situation with plenty of psychological help from the camaraderie he finds with other patients: “You find you’ve got endless company. Everybody’s got something.” Solomon skillfully intertwines the medical with the emotional, affectingly describing the toll his illness takes on his already fragile family; the chapter “Telling Luke” is a small masterpiece in depicting a father-son bond under unthinkable pressure. Through the whole account, Solomon is both a remarkably smart guide and a very entertaining one. There is no pathos in these pages, and that will move readers all the more.

THE TEN
by Leland Myrick
Indie

THOMAS JEFFERSON, RACHEL & ME
by Peter B. Boody
Indie

I DON'T HAVE A HAPPY PLACE
by Kim Korson
Nonfiction