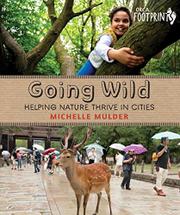 Dependent on what they could find in nature for thousands of years, humans eventually developed agriculture and banded together into cities, but now they’re looking for ways to bring the natural world into urban environments.

The author of Pocket Change (2016), Trash Talk (2015), Every Last Drop (2014), and similarly eco-conscious titles continues this series with a look at urban rewilding. In four chapters, she describes the development of cities, the environments they overlaid, current examples of efforts to bring nature back, and how kids can get involved. She mentions the effects of the Industrial Revolution, efforts to disconnect indigenous peoples from their links with nature, the origin of lawns, and instances of large, wild animal visitors. Readers may have difficulty discerning the organization that underlies her argument, but they will certainly get her message: we all need a stronger connection to the natural world. She encourages young people to get outside and get their hands dirty (it’s healthful!) and to get involved in citizen-science efforts. Her text is made more accessible with clear subheadings, italicized words (defined in a glossary), and plentiful photographs from around the world which include a variety of ages and races. Sidebars offer interesting “Wild Facts” and “Making Tracks,” examples from her own life.

Recommended for settings where others in the series have been useful. (resources, index) (Nonfiction. 8-12)

NATURE IN THE NEIGHBORHOOD
by Gordon Morrison
Children