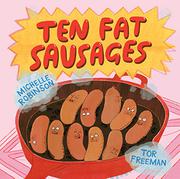 An irreverent take on a nursery rhyme.

“Ten fat sausages, sizzling in a pan,” starts off this rhyme, replicated in the frontmatter. It’s typically sung, useful when trying to keep young children entertained or teaching them to count down by twos. But when the story starts, while one sausage goes “POP,” the other doesn’t go the expected “BANG,” as each even-numbered sausage tries to make their escape, but “tries” is the operative word. One is somehow accidentally blendered along with an extremely concerned green bell pepper, another is eaten by a cat, and so on, until the two remaining sausages band together to make their escape. There’s plenty of humor here, mostly carried by Freeman’s expressively painted foodstuffs and blocky, realistic scenery—a vintage refrigerator, fast-whirling ceiling fan. Unfortunately, the jaunty rhythm of the original barely translates to picture-book form here, and too often unfortunate readers will have to wrench the scansion or ignore rhyming conventions (“sauce” attempting to rhyme with “course,” for example) in order to make it work for storytime. The ending is confusing as well; the sausages limp off outside, far from unscathed, but how they went from “one main course,” terrified on buns, to freedom remains a mystery.

This twisted version of a familiar favorite is too inconsistent to satisfy. (Picture book. 3-6)

AND THE ROBOT WENT…
by Michelle Robinson
Children

A BEGINNER'S GUIDE TO BEAR SPOTTING
by Michelle Robinson

TURTLE AND ME
by Robie H. Harris
Children

OLIVE AND THE EMBARRASSING GIFT
by Tor Freeman
Children

OLIVE AND THE BAD MOOD
by Tor Freeman
Children

OLIVE AND THE BIG SECRET
by Tor Freeman
Children