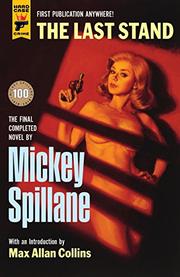 Legendary pulpmeister Spillane’s final completed novel and a novella from half a century earlier are published for the first time to mark the centenary of the author’s birth.

In his Introduction, Max Allan Collins, the frequent collaborator of Spillane’s later years, notes the bedrock importance of revenge to the author’s most characteristic work. That’s an acute observation about A Bullet for Satisfaction, presumably written in the early 1950s, in which Homicide Capt. Rod Dexter, kicked off both the investigation into political kingpin Mayes Rogers’ murder and the Gantsville police force when he accuses District Attorney Frank Graham of being a rotten apple, goes into Mike Hammer mode, cleansing Gantsville by summary violence. But it’s much less true of The Last Stand, a far less action-driven and even (gasp!) meditative tale in which pilot Joe Gillian, stranded in God’s country when his ancient airplane conks out, bonds with Sequoia Pete and his Native American community over an arrowhead Joe’s found that seems to be a source of limitless energy. His plane fixed by Pete’s predictably beautiful sister, Running Fox, who just happens to have an engineering degree, Joe’s about to return to what passes for civilization when he spots something from the air that makes him turn back and plunges him—well, dips him gently—into a tussle over the treasure sought for years by old Miner Moe. Not even the involvement of the FBI and Joe’s conflict with Big Arms, a battler who correctly reads Joe as a rival for Running Fox’s affections, can turn up the heat on this surprisingly tranquil valedictory.

Spillane hot and cool, standard-issue and contemplative: a volume that bookends his storied career even more appropriately than the recent collection A Long Time Dead (2016).

SOMETHING’S DOWN THERE
by Mickey Spillane
Fiction

A CENTURY OF NOIR
by Mickey Spillane

THE BIG BOOK OF THE CONTINENTAL OP
by Dashiell Hammett
Indie