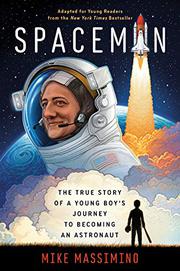 A 2016 memoir from the first astronaut to tweet from space, lightly tweaked for younger readers.

Along with some reworking of the prose, Massimino drops chapters on his father’s death and his schooling in NASA fundraising and media relations. As a result, though this edition isn’t significantly shorter or easier to read than the original, his valorization of teamwork, maintaining a positive attitude, and overcoming past struggles and reverses through determination play out less in his private life than in his roller-coaster ride through school, astronaut training, and two missions into space. Fortunately, he also paints vivid word pictures, whether capturing the heady experience of playing with an Astronaut Snoopy as a child (“I still have him, only now he’s been to space for real”) or, memorably, the removal of what he repeatedly describes as “111 very tiny screws” from a failed device on the Hubble Space Telescope. Readers will feel his profound shock, but also relief, upon learning (in a segment pointedly titled “Russian Roulette”) that the shuttle Columbia had come apart upon reentry on the mission just after his. Yes, he writes, it’s very nearly impossible to become an astronaut, but: “I wanted to grow up to be Spider-Man—and I did.” Photo illustrations not seen.

Readers of either edition will be in for a grand, inspiring, sometimes hilarious ride. (Autobiography. 11-13)