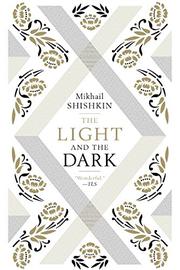 THE LIGHT AND THE DARK

The voices of the lovers alternate throughout the novel; usually Vovka or Sashka will begin with an endearment, but these are monologues, not letters—neither responds to the other. Think of them as ships that pass in the night, again and again. Once, they spent some time together in a Russian dacha. That’s the extent of our knowledge of them as a couple, for Shishkin conceals as much as he reveals. Nor do readers know when this is happening, until they reach the only historical marker: the Boxer Rebellion of 1900. Vovka decides at the outset to “choose myself a war.” He is assigned a position at staff headquarters, writing death notices to next of kin. As the army arrives in the Far East, there are some magic realist elements: an island that’s a fish, people with dog heads. Indeed, the whole conflict in China has an otherworldly tinge, with seven Western nations allied against the anti-Christian Chinese peasantry. The high death toll, though, is uncomfortably real. Sashka’s monologues concentrate on domestic matters: her marriage to a painter, her complicated relationship to his ex-wife and daughter, her attendance as a nurse on her mother, dying of cancer. In the constant tension between the life force and death, the scales are weighted toward death. Yet, in a significant moment, Sashka encounters a burning bush, an obvious Biblical allusion, and understands that she and Vovka “are already husband and wife.” Outside of time, no doubt. It is also significant that the novel finds Vovka meeting Prester John, the Christian king of medieval legend whose territory the army had crossed en route to China and who will, maybe, effect the lovers’ reunion.

Shishkin expects his readers to do some serious decoding; whether it’s worth the effort is an open question.

THE CORONATION
by Boris Akunin
Mystery

THE SACRED BOOK OF THE WEREWOLF
by Victor Pelevin
Nonfiction

THE DANCER FROM KHIVA
by Bibish

LOVE AMONG THE PARTICLES
by Norman Lock
Newsletter sign-up