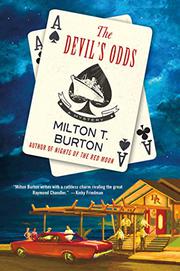 December 1942. As the U.S. wages war in Europe and the South Pacific, suddenly there’s an unsettling sound of saber rattling much closer to home. Mobbed-up thugs from New Orleans have sussed out big opportunities in Galveston’s gambling operation and are preparing to move in. Not so fast, though: The locals like what they have and are disinclined to share. This is the mess young Virgil Tucker, Texas Ranger, gets drawn into sideways. A pretty redhead named Madeline Kimbell is scared silly because she’s been the inadvertent witness to a murder. The killers know what she’s seen and are coming after her. As a favor to a friend, young Virgil, on whom friendship confers compulsory obligations, is about to offer her his protection, even though he has no idea what he’s supposed to protect her from. At first, he thinks he faces nothing worse than Nolan Dunning, Madeline’s disenchanted boyfriend, who’s irate because his love has recently become unrequited. But Madeline is a girl with secrets, and Nolan, it turns out, is connected. Soon enough Virgil finds himself confronting other, much more dangerously connected people. As the gangster war heats up, body bags fill, and intrepid Virgil will need all his brains, resolve and resourcefulness to stay out of one.

Likable characters in a negligible story.

NIGHTS OF THE RED MOON
by Milton T. Burton
Fiction

THE SWEET AND THE DEAD
by Milton T. Burton
Fiction