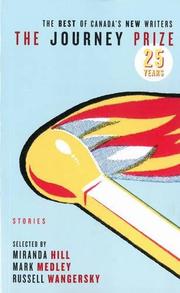 A welcome collection of short fiction from the winners of the Journey Prize, Canada’s take on something like the Pushcart (though with a nicer purse).

Now in its 25th year, the Journey Prize is awarded annually to “an emerging writer of distinction,” with $10,000 to the winner. Moreover, the annual prize story volume is considered the “most prestigious annual fiction anthology in the country.” Certainly, this anniversary collection, judged by past prizewinner  Hill, along with National Post Books Editor Medley and novelist Wangersky, shows why. Noting that the submissions are read blind, making the Journey “as pure a prize as you’ll find in Canada,” the editors lead off with a decidedly fugitive piece by Laura Legge, which closes with a lovely bit of poetry: “I feel I could float with the tide, lay back and let it move me, like a sprig of sea kelp, like a caravel skimming some long corridor of blue, easily, with the sun as its sentinel.” That would do Leonard Cohen proud, and readers will be eager to hear more from her. Another selection, by Natalie Morrill, takes an original if typographically challenging approach to depicting voices speaking at once (three parallel columns, one for each voice present), and voices spoken in crisis at that. In another, Doretta Lau nicely subverts ethnic stereotypes over the battlefield of a communal meal: “I looked around at the table. Yellow Peril was slurping up her noodles with gusto. Riceboy was shoveling rice into his mouth like a champion competitive eater, while Suzie Wrong took big gulps of her drink.” There’s not a dud here, though, it being Canada, there’s plenty of snow (for which see especially Jay Brown’s well-observed story “The Egyptians”).