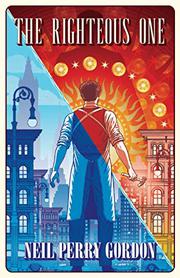 This second installment of a religious thriller series stars a humble cobbler.

Gordon’s (The Cobbler’s Tale, 2018) novel continues the story of the legendary tzaddik, a group of 36 pious and supernaturally gifted Jews who always exist in the world in a kind of mystical balance with their evil counterparts, the rasha. Moshe the cobbler, a humorous and unassuming worker in New York, is a tzaddik, the son of a man named Pincus Potasznik, who founded a secret group called the Landsman Society of Krzywcza. For years, New York City Councilman Arnold Lieberman has been searching for the son of Pincus in order to recruit him in the age-old fight against the rasha, here in the form of a Bronx-based Jewish gangster named Solomon Blass and his ruthless son, Myron. Only a teenager in the first book, Moshe is now 60 years old and decidedly nonheroic in his daily routine. But Lieberman is persistent, and soon Moshe is embroiled in a battle that sprawls over the real world and the dream realm. Gordon writes all of this in a smoothly controlled narrative that’s equally adept at both the small, personal details—each main character is well shaped and the bad guys are every bit as three-dimensional as the good guys—and the larger philosophical tapestry inscribed with the minutiae of the cabala. “In order to connect with the Light, we must learn how to face the Opposition, the source of life’s challenges,” readers are told at one point. “The uninitiated at first cringe at this term. However in order to achieve authentic spiritual growth, the Opposition must not be feared, instead it must be accepted as a blessing from the Creator.” Throughout the enjoyable sequel, the author playfully overlays the quotidian New York reality onto a dramatic supernatural backdrop whose existence most ordinary people never suspect. This second volume can easily be read independent of the first.

An entertaining, thought-provoking fantasy in which a plainspoken protagonist is enlisted in a war.