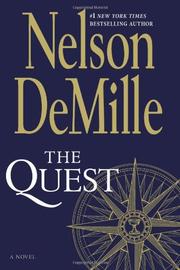 DeMille (The Panther, 2012, etc.) dispatches three knights errant in search of the Holy Grail in this major revamping of his first novel.

Freelance journalist Frank Purcell once spent time in a Khmer Rouge prison. Brit writer Henry Mercado was captured in World War II Europe and sent to Stalin’s gulag. Vivian Smith’s a mysterious young Swiss photographer. It’s 1975. The three adrenalin junkies meet in Addis Ababa. Smith and Mercado ask Purcell to join a foray to cover fighting between rebels and Haile Selassie loyalists. As the trio journeys toward the front lines, they camp overnight at an abandoned colonial-era spa. There, the quest for a scoop detours. Mortally wounded Father Giuseppe Armando stumbles in from the jungle. While serving during the 1930s Italian invasion, the young Sicilian priest discovered an odd Coptic monastery. There, Armando found the Holy Grail. To prevent revelation of the secret, Coptic Christians kept him imprisoned for decades. After Father Armando dies, the journalists are captured by the psychopathic rebel Getachu, but they manage a derring-do escape. DeMille’s adept enough with this age-old theme, but he stumbles with a long Rome-based middle section where the three retreat to plan anew. Some of DeMille's secondary characters, including mercenary Col. Sir Edmund Gann and Ethiopian Jewish princess Miriam, outshine the protagonists, but DeMille adds a ménage love story, with a last-night-on-earth sex scene between Purcell and Smith. That means Smith betrays her lover, Mercado. Considering Smith’s and Mercado’s religious fervor, Smith rotating between beds seems off-kilter, but no more so than the trio’s casual disregard of the Ark of Covenant, said to be secreted in an Ethiopian Jewish village. DeMille also poses threats that never materialize, like the fierce Galla tribe roaming about.

Despite some rollicking good action, particularly aboard Mia, an ancient Navion aircraft, DeMille’s quest's conclusion may leave readers thinking, "Is that all there is?" However, Vivian Smith finally does make up her mind.

After a showdown with the notorious Yemeni terrorist known as The Panther, in Nelson DeMille’s latest suspense novel Radiant Angel, NYPD detective John Corey has left the Anti-Terrorist Task Force and returned home to New York City, taking a job with the Diplomatic Surveillance Group. Although Corey's new assignment with the DSG-surveilling Russian diplomats working at the U.N. Mission-is thought to be "a quiet end," he is more than happy to be out from under the thumb of the FBI and free from the bureaucracy of office life. But Corey realizes something the U.S. government doesn't: The all-too-real threat of a newly resurgent Russia. “Perfect summer beach reading, with or without margaritas, full of Glock-and-boat action,” our reviewer writes. View video >

THE DESERTER
by Nelson DeMille
Fiction

THE PANTHER
by Nelson DeMille
Mystery

THE RICH AND THE DEAD
by Nelson DeMille
Fiction

THE GATE HOUSE
by Nelson DeMille

THE DOVEKEEPERS
by Alice Hoffman
Fiction

THE BOOK OF THE DEAD
by Douglas Preston
Fiction

BEYOND THE ICE LIMIT
by Douglas Preston
Fiction

THE ASSASSIN
by Clive Cussler
Fiction