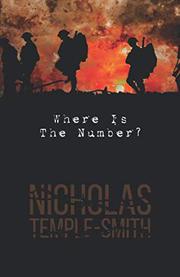 WHERE IS THE NUMBER?

A World War I novel follows a platoon of British volunteers who eventually fight in the disastrous Battle of the Somme.

The facts in this fictional story are well known to the most casual student of history. World War I—“The Great War”—begins in 1914. In Britain, patriotic young men rush to sign up. They will teach Germany an unforgettable lesson in three or four months. Instead, four years later, an exhausted Europe realizes that there has never been butchery on such a scale, and nowhere so brutally as the 1916 Somme offensive, when the Allies tried to break through a massive trench line. Over 20,000 British troops lost their lives in just the first two hours. But what will really draw readers into Temple-Smith’s (The Story of Elijah, 2005) novel are the vivid sketches of the Brits in the second platoon of the “St. Marylebone Rifles.” There is 2nd Lt. Arnold Snow, considering it his duty to volunteer and acquitting himself well. There is Frank Claybourne, a petty thief who enlists after he accidentally kills a mark. There is Alec Millcross, who sees this war as the ticket to becoming a famous poet. There is Lord Roland Selway, son of the Duke of Dornoch, who rebels against an arranged marriage. Joining them are Fred Quill, retired after an honorable career but wanting one more chance to serve, and Cpl. Seamus O’Malley, whose philosophy embodies whatever profits Seamus O’Malley. There are many more, of course, some who make it back alive and some who don’t. But all are meticulously portrayed. Focus is paramount: Every early chapter is devoted to one of these soldiers and—a fearful symmetry—the last section skillfully reveals how each man lived or died in the carnage. The author’s prose is reserved, traditional—British. His writing style is well suited to the era’s spirit and often elegiac: “Victory in 1918 did not usher in an age of tranquility and comfort, but as far as they could, after their own fashions, at their own stations in life, and with varying degrees of success, these men who remained led reasonably contented lives. They all did their best.” There is no lack of World War I novels, but the audience will find that reading Temple-Smith’s book is both a pleasure and a privilege.

An engrossing and moving war drama with a strong cast of indelible characters.