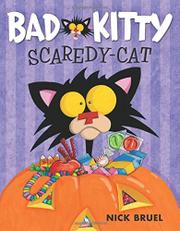 A look back at the Halloween that transformed a brave, daring, and energetic kitty into a scaredy-cat and then into the Bad Kitty readers know.

As with her other adventures, readers are in for several trips through the alphabet. The first lists the cat’s attributes before she became a scaredy-cat. The second lists the things she saw that scared her: Evil Ectoplasm, a Killer Kracken, a Putrid Pirate, a Toxic Tarantula. Each (except for Uncle Murray, who just needs to borrow some candy) is a costumed child with trick-or-treat bag or bucket in hand, though on the first run-through, they look all too real and menacing, sending poor Kitty to cower under the couch. Until, that is, one of them drops the candy. Huge eyes reveal how excited Kitty is at the haul, Apples to Zoo animal crackers, and at that moment, she decides to become a bad Kitty, besting and revealing each costumed child and stealing the candy: she Flattened Frankenstein, Mauled the Mummy, and Nullified the Neanderthal. Bruel’s illustrations, heavy on the blacks, purples, and oranges, do double duty, helping youngsters with the challenging vocabulary, though not all the pictures really show the actions (Harassing the Hag looks like either tickling or scratching, and both Gnawing on the Goblin and Injuring the Invisible Man involve biting).

BAD KITTY DOES NOT LIKE THANKSGIVING
by Nick Bruel
Children

BAD KITTY GOES TO THE VET
by Nick Bruel

BEN AND THE SCAREDY-DOG
by Sarah Ellis
Children

WHAT WILL YOU BE FOR HALLOWEEN?
by Mark Todd
Newsletter sign-up