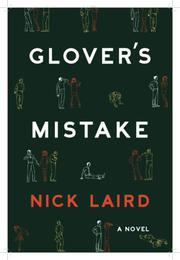 Laird (Utterly Monkey, 2006, and the husband of novelist Zadie Smith) returns with a comedy of manners concerning romance in the transcontinental art world.

A native of Northern Ireland who later lived in London and now teaches in New York, Laird has positioned himself perfectly with this book. The fast-paced setup quickly engages the reader: A 35-year-old teacher and sometimes art blogger named David Pinner learns of a London exhibition by his former teacher, an American artist named Ruth Marks. David remembers Ruth as having a profound effect on his life, and he was apparently more than a little smitten with her, but an age gap of 13 years seemed insurmountable then. David remains undaunted when Ruth has no memory of him, and the two renew (or start) a friendship that David plainly hopes will blossom into something more. Yet his wishes go awry once Ruth meets David’s 23-year-old flat mate, James Glover, a bartender who is considerably less cultured but much better looking. Perhaps because she inhabits a world of aesthetics, the thrice-married Ruth falls hard for this innocent less than half her age, though some crucial character revelations make it hard for them to consummate their relationship. Though James is the titular character, the novel is more about David—how he seethes and schemes, revealing so much of his character in his attempts to subvert the relationship between the two people to whom he apparently feels closest. There’s a romantic triangle, though Ruth barely acknowledges David’s interest as more than friendship (making him feel “like a eunuch,”) while James intuits that David might be more jealous of Ruth’s claim on James than vice versa. As David begins an online flirtation and continues to write supercilious, self-serving blog entries for the deliciously named Damp Review, the reader must discover whether Ruth or David is James Glover’s Mistake.

Another sharply observed book by a very funny writer, though this time there’s more charm than depth.