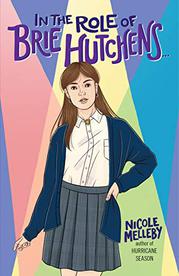 IN THE ROLE OF BRIE HUTCHENS...

From the author of Hurricane Season (2019) comes a story about the lengths to which people go to avoid the discomfort of change.

Aspiring actor Brie, 13, loves soap operas, with their dramatic plot twists and complex webs of relationships. Brie does not love school: Her mediocre grades, “organization issues,” and ambivalence about religion dismay most of the teachers at her co-ed Catholic middle school. But after her mom accidentally learns that Brie likes girls, not boys, Brie attempts to become an A student and a more devout Catholic to “keep [her] mom’s focus away” from this developing discovery. The problem is that being a “good girl” is not so easy as Brie’s perfect, pious classmate Kennedy makes it seem, and in trying to be like Kennedy, Brie realizes they might have more in common than she thought….Unlike the soap operas Brie devours, this is no rehashing of stale tropes. Brie’s journey is not one of escape from a stifling Catholic girlhood but is a more nuanced exploration of how to reconcile faith and identity. Melleby’s clear, honest voice expertly captures the frustration, awkwardness, and fear of being vulnerable—as well as the potential rewards. Brie, Kennedy, Brie’s best friend, and their families appear white; Wallace, “one of three black kids in their grade,” is a well-developed secondary character.

This funny, tender, and heart-wrenching story will have readers calling for an encore. (Fiction. 8-13)