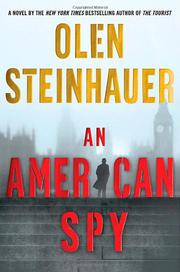 In Steinhauer’s superb spy novel, Milo Weaver (The Nearest Exit, 2010, etc.), in from the cold, wants to stay that way, but no one will let him.

Some say he was born to be a spy. Others don’t say anything at all about him, because the fact is Milo Weaver—maximally understated, eminently ignorable—is cellophane. Those who know spy-craft best see virtue in this of course, and he’s recruited for the Tourists, an elite, extremely secret branch of the CIA. In time, Milo becomes remarkable, a great American spy. And then the unthinkable happens. Before one can say clandestine, the Tourists are converted to history—33 of them, virtually the entire department, wiped out at the command of the wicked and wily Xin Zhu, a spymaster highly placed in the Guoanbu, the intelligence arm of the People’s Republic of China. Milo survives, but is suddenly jobless. In from the cold by accident as it were, he finds himself basking in familial warmth: beautiful, loving wife, adorable six year old daughter. As seldom before, in a way he never expected to be, Milo’s content. Not so for Alan Drummond, his boss. Rabid for vengeance, Drummond wants the aid and all-out support of his ace agent and will do anything to get it. As it happens, Xin Zhu is also interested in the talented Mr. Weaver and will do anything to turn him. And so begins a geopolitical game of chess—with Milo a pawn, destined, soon, to be half-forgotten—between a pair of opponents consumed by mutual detestation. But in chess, as in life, if certain pawns are half-forgotten they can become powerful enough to change the game.

Thickets of tricky conspiracies, swamps full of secret agendas: Reader, you’re in le Carré-land, guided there unerringly by one of the best of the newer crop.

THE MIDDLEMAN
by Olen Steinhauer
Fiction

ALL THE OLD KNIVES
by Olen Steinhauer
Fiction

THE TOURIST
by Olen Steinhauer
Fiction

THE MAN WITH A CHARMED LIFE
by Graham Fulbright
Fiction

SPIES OF THE BALKANS
by Alan Furst
Newsletter sign-up