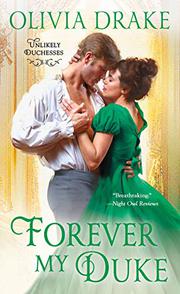 Second in a historical romance series featuring dukes who fall for governesses.

Hadrian Ames, Duke of Clayton, is on his way to the village of Whitnash to court 18-year-old Lady Ellen Godwin when an ice storm forces him to take shelter at an inn. The prospective union has long had the blessing of both the Earl of Godwin, who fostered Hadrian as a child after his father died, and Hadrian’s late father himself. Hadrian thinks little of women in general—they pout, plead, scheme, and simper—but recognizes that at age 29, it is time for him to produce an heir. When a lovely American guardian chases her young charge, Leo, into his room at the inn, Hadrian’s outlook abruptly changes: “The world faded as he stared at the vision standing before him.” Natalie and Leo barely survived a vicious attack on their American frontier mission by renegade British soldiers. The massacre took the lives of Leo’s parents, one of whom was Lord Godwin’s eldest daughter, Audrey. Natalie promised a dying Audrey that she would return Leo to her family in England. Hadrian becomes Natalie’s reluctant defender when Lord Godwin and his second wife greet Leo and his American guardian with extreme skepticism. Natalie’s tall, willowy beauty, her forthrightness, and her rejection of hierarchy set her apart from other women, and soon Hadrian’s instant attraction becomes something more, although he allows her to believe he is still interested in Lady Ellen until nearly the end of the novel. In 2020, this “not like all the other girls” trope is more apt to generate reader antipathy toward the hero than admiration for the heroine. A gratuitous attempted rape of Natalie by a groom merely provides a pretext for the duke to seduce her rather than a means to address her post-traumatic condition.

A fresh plot is undermined by stale romance elements best left in the genre’s past.