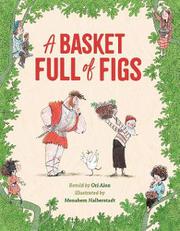 A BASKET FULL OF FIGS

A Roman emperor learns the importance of respecting generations.

“The mighty Emperor Hadrian” rides through a small village on his great steed, causing fear in the inhabitants. But then a very old man emerges, carrying a small fig tree to plant. Hadrian is quite astounded, for the man is almost 100 years old and certainly will not live long enough to enjoy the fruit. The man explains that past generations left many fruit trees for him to enjoy, and he is doing the same for future generations. Three years pass, and the emperor returns to that same village, again causing fear. Except, of course, for that old man, who now happily holds a basket brimming with figs. He invites the emperor to enjoy some, just as his family has been able to do. When the emperor is sated, he remounts his horse, and the old man peers into the basket. The contents are no longer figs—they are gold coins. But for the old man, the true gift is the grove of fruit trees flourishing “for generations to come.” Elon’s lovely little tale, translated from the Hebrew, is adapted from the Midrash, stories that provide commentary on Hebrew Scriptures. Halberstadt’s artwork, resembling a pen-and-ink style, is expressive and not time-specific, mixing Hadrian’s Roman armor with mid-20th-century Mediterranean peasant garb. A duck provides silent but humorous asides. The emperor and old man both have pale skin, but there are children of color in the old man’s village.

Perfect for Earth Day and every day. (Picture book. 5-8)

WHO WILL ASK THE FOUR QUESTIONS?
by Naomi Ben-Gur
Children