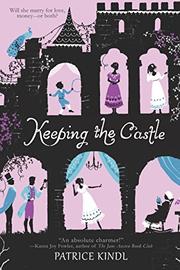 A romp of a Regency romance told through the discerning voice of a witty teenage beauty whose family needs her to marry for money.

Lovely Althea Crawley, 17, lives with her kind but clueless twice-widowed mother in Crooked Castle, a drafty white elephant perched precariously on the Yorkshire coast. Althea’s 4-year-old brother, who’s heir to the castle, and her self-centered older stepsisters, Prudence and Charity, round out the household. With few funds to make ends meet, Althea, unlike so many fictional heroines who go off on unlikely adventures, accepts that she must marry for money. Prospects look up with the arrival in the neighborhood of handsome, young Lord Boring. When Althea launches her campaign, described in military terms, to secure his affections, not all goes as planned. As she pursues him, her occasional outspokenness raises a few eyebrows but also attracts admiration from an unsuspected quarter. Kindl respects the conventions of the genre while also gently mocking it. Althea observes, for example, that their ancient butler, Greengages, correctly pronounces the name of neighbor Doctor Haxhamptonshire as “Doctor Hamster.” Readers will enjoy Althea’s entertaining forays into the marriage market, secure in the belief that all will end well.

While the happy ending comes as no surprise, the path to it is funny as well as satisfying, with many nods to Jane Austen along the way. (Fiction. 13 & up)

THE GIRL IN THE CLOCKWORK COLLAR
by Kady Cross
Children

DON'T YOU TRUST ME?
by Patrice Kindl
Children

A SCHOOL FOR BRIDES
by Patrice Kindl
Children

LOST IN THE LABYRINTH
by Patrice Kindl
Children

THE WOMAN IN THE WALL
by Patrice Kindl
Children

OWL IN LOVE
by Patrice Kindl

MORE THAN A PRINCESS
by E.D. Baker
Children