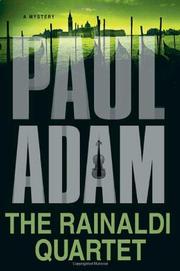 Shortly after playing a bit of Beethoven with his friends Tomaso Rainaldi, a retired professional musician and sometime violin teacher, and Antonio Guastafeste, a local detective, Gianni Castiglione, an elderly luthier (that is, a maker of stringed instruments), gets a worried call at his Lombardy countryside home from Rainaldi’s wife Clara. His friend hasn’t come home and is soon found stabbed near his abandoned car. Guastafeste, a generation younger than narrator Castiglione or Rainaldi, returns when he’s assigned to the case. Because Castiglione’s technical knowledge makes him a valuable resource, he accompanies Guastafeste on his investigation, which begins with Venetian violin collector Dottor Forlani, who lives in squalor but spends a small fortune on instruments. They learn that Rainaldi had contacted Forlani about acquiring a valuable violin known as the “Messiah’s Sister.” Not long after their visit, Forlani is likewise murdered by someone as ruthless as he is determined. The mystery’s trail, which includes old letters and older tombs, follows a network of auction houses and black-market dealings across Italy and western Europe, climaxing at Casale Monferrato, the cement capital of Italy.

The leisurely, rococo storytelling perfectly suits the subtle pleasures of the tale. Adam (Flash Point, 2004, etc.) offers lots of European history and an engrossing look at a subculture of the classical music world as well as a nifty mystery.

DEATH AND THE MAIDEN
by Gerald Elias
Newsletter sign-up