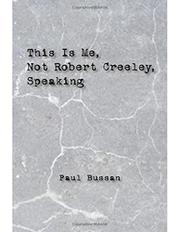 THIS IS ME, NOT ROBERT CREELEY, SPEAKING

A set of poems that often pay homage to other poets in their explorations of love, memory, spirituality, and desire.

In his latest collection, Bussan (A Rage of Intelligence, 2013, etc.) shows his engagement with Robert Creeley’s work in terms of that poet’s compressed style, enjambment, and playfulness with word order. As in Creeley’s 1979 collection Later, Bussan emphasizes themes of time and memory. Bussan’s opening, titular poem speaks of “A new labor, not / entailing sweat nor death.” This appears to refer to Creeley’s work “Heroes,” in which the speaker quotes the Cumaean Sibyl’s reply when Virgil’s Aeneas asks about visiting his father in the underworld: “hoc opus, hic labor est” (“this is the task, this is the hard work”)—getting there is easy, the poet seems to say, but returning is difficult. Creeley’s poem continues: “That was the Cumaean Sibyl speaking. / This is Robert Creeley,” concluding that “death also / can still propose the old labors.” Here, Bussan proposes a “new labor” that has nothing to do with sweaty hard work (per the Sibyl) or with death (per Creeley). Just as Creeley goes beyond the Sibyl’s words, Bussan goes beyond Creeley’s, speaking for himself in this poem and in the book as a whole. It is, itself, a labor—a task he’s set for himself whose production could be said to relate to a return from an underworld. Like Creeley, Bussan employs subtle internal rhymes (“only I”; “Delphi”) and increases the poem’s impact with unusual word placement. Several other poems in the collection effectively play with word order in this way, such as “The Test,” which begins “Tired of, / before the swine, / casting pearls, I….” Bussan’s allusiveness can sometimes be confusing, however; for example, “At the Tubes of Liberty” will be a puzzling phrase for those who are unfamiliar with Pittsburgh.

It’s not unusual for poets to write after a respected poet, and this book does include some examples of this. However, Bussan’s bolder stance is to write beyond them, as in “Beyond W.C.W,” “Beyond Robert Duncan,” and “Beyond Lew Welch.” This stance doesn’t always lead to an engaging payoff, though, as in the William Carlos Williams–referencing piece: “So much does not / depend / on fountain pens / that are / disposable / when they / are all out of / black ink.” Although this mimics the structure of Williams’ 1923 poem “The Red Wheelbarrow,” it kills its engine—Williams’ insistence that something that seems insignificant requires attention and demands memory. Also, readers already know that a disposable pen is insignificant and replaceable. Similarly, “Fairmont Hotel, SF, CA” is “Inspired by Donald Hall’s ‘Gold,’ ” but it’s a much lesser piece. In other poems, however, Bussan’s compression works well, like pressure that creates diamonds; “Bonnie and Clyde” is one such jewel, reading in full: “Other than / the robbing / and the killing / and the running / and the ending, the way / it should be.”