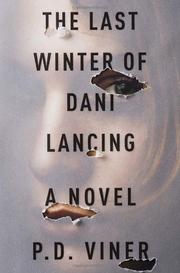 THE LAST WINTER OF DANI LANCING

In Viner's feverish psychological thriller, family and friends of Dani Lancing, who was raped and murdered 20 years ago, go to frightening lengths to get to the bottom of, or obscure the facts of, the cold case.

Dani's disappearance in 1989, when she was a London college girl, devastated her parents and ultimately drove them apart. Encouraged by advances in DNA testing, her mother, Patty, a former investigative reporter, is obsessed with identifying the killer. She is willing to commit violence of her own to gather fresh evidence. Dani's father, Jim, who is retired, suffers from night terrors, eased only by regular visits from his daughter's ghost. Jumping back and forth in time and switching points of view, the novel connects all sorts of dots, on multiple narrative levels, in establishing suspects. They include Sep, a manipulative druggie who turned Dani on to heroin; Duncan, a married man who was once Dani's lover; and Tom, her childhood best friend, who never got over his unrequited crush on her. Now a police detective called the Sad Man for his teary sensitivity to cases such as hers, Tom cozies up to shady characters as well as Dani's reunited parents in conducting his own investigation. It takes a while for the reader to get on the same page with Viner, and the climax is over-the-top. But once readers hook into the book's fragmented approach, this becomes a chilly, emotionally charged page-turner. Oddly enough, for all its London references and locations, the novel has an American flavor. Perhaps the author, who has achieved success as a filmmaker, spent a lot of time viewing Hollywood noirs?

Viner's debut is not completely convincing, but it will hook readers with its intensity and puzzlelike plot.

BEFORE I GO TO SLEEP
by S. J. Watson
Fiction