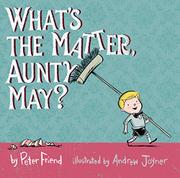 WHAT'S THE MATTER, AUNTY MAY?

Eloise meets the Cat in the Hat in this rhymed story of a boy who “helps” his beleaguered relative tidy up.

Dressed in black shorts, white knee-highs and a bow tie, this blond, bright-eyed protagonist sweeps through his rarified setting like a whirlwind, wreaking havoc on every antique vase, suit of armor and pet in his path. The child’s constant state of cluelessness matches his aunt’s ongoing inability to stop him. The (sometimes-clunky) rhyming, first-person narration poses a stream of questions, aimed at discovering why Aunty has been screaming: “Or was it, Aunty, when I tried / to fix your bathroom sink, inside— / and then I heard that funny thud / that burst your pipes and caused that flood?” A white cat is doused in red ink during dusting, a budgie barely survives the vacuum cleaner, and somehow both Aunty May and a pink, frosted cake become caught in the ceiling fan. Joyner’s illustrations, rendered in a predominantly pink, gray and turquoise palette, have a retro, high-octane look, providing energy and touches of humor to this tale about the center of the universe and his privileged aunt.

Mildly amusing the first time through, there is not much more to get during repeated readings. (Picture book. 3-5)

THE LEGEND OF KING ARTHUR-A-TOPS
by Mo O'Hara
Children

UNSTOPPABLE ME
by Susan Verde
Children

DUCK AND HIPPO GIVE THANKS
by Jonathan London