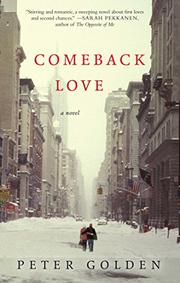 Golden’s breakout debut fiction is a passionate, yet melancholy, story of love, loss and reconciliation.

It’s 1968. Gordon Meyers is stumbling through Brooklyn College, reading about Vietnam and contemplating his father’s World War II heroism and Silver Star. He has a 2S deferment, and his mother is happy, but Gordon is unsettled, grasping onto the idea he could be a writer. With his uncle’s help, Gordon gets a gig writing freelance features for Long Island Press. His first assignment is to write a piece on a group of medical students lobbying for legalized abortion. In the process, Gordon interviews Glenna Rising, a dazzlingly beautiful and casually sexy medical student. Attraction is immediate, and soon Gordon takes up residence in Glenna’s apartment in an old white colonial house in the Bronx, an idyllic place she shares with fellow medical students Palmer, WASP through and through, quickly nicknamed Biff the Brooks Brothers Mouse by Gordon, and zaftig Robin, a nominal political radical. Golden’s novel follows Gordon and Glenna’s love from the 1960s to a final reunion three decades later. The author writes familiarly of young love’s angst and immaturity, insecurities and circumventions. The young lovers struggle to find a life together against a backdrop of social uncertainties, ambition and family drama, each burdened by shadows of their past. Glenna is consumed by medical studies and part-time work in an illicit abortion enterprise. Gordon is confused by his ambitions and shadowed by his desire to experience war. Then comes the inevitable breakup. Glenna drifts; Gordon is drafted. There is marriage and a son for Gordon and a marriage of safety and convenience for Glenna. Finally in the midst of a snowstorm, Gordon is inexorably drawn to see Glenna again, not to dispense with ghosts from the past but rather as part of “the long, jagged arc” of his life.

Grab a handful of tissues, think The Notebook and then start speculating on actors best suited to bring Gordon and Glenna to the big screen.

A MAN OF HIS OWN
by Susan Wilson
Fiction

THE ART OF HEARING HEARTBEATS
by Jan-Philipp Sendker
Fiction

THE HEART OF HENRY QUANTUM
by Pepper Harding
Fiction

A CIRCLE OF WIVES
by Alice LaPlante
Newsletter sign-up