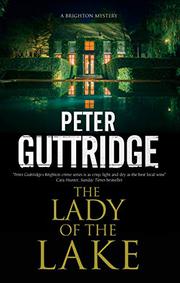 THE LADY OF THE LAKE

DI Sarah Gilchrist and DS Bellamy Heap of the Brighton division are seconded to the short-staffed Lewes District just in time to catch the case of a body in a lake. The neighbor who found the dead man, his throat cut, identifies him as Maj. Richard Rabbitt, owner of the Plumpton Down Estate but not the lake, which belongs to Nimue Grace, whom Bellamy immediately recognizes as a well-known actress who’s gone into seclusion. Rabbitt was much disliked by his neighbors; his estranged wife, Liesl, and his sister, Tallulah, were no great fans either. They learn from Tallulah that Rabbitt and his putative business partners, Said Farzi and William Simpson, were trying to buy Nimue’s property. Simpson is well known to them as a smooth crook who almost ruined Gilchrist’s career and that of her former lover, Brighton Police Commissioner Bob Watts (Swimming With the Dead, 2019, etc.). When they interview Nimue, they find her more than willing to help and are soon under the spell of her stunning beauty, charm, and considerable intellect. But dredging her lake reveals nothing more than a group of empty white plastic containers firmly attached to the shore which Nimue denies ever having seen. Farzi is not only Nimue’s apparently wealthy neighbor, but also a slum landlord and a major danger to her. When a man is found beaten to death in one of Farzi’s Brighton apartments, the police suspect that Farzi and Simpson are involved in importing drugs and slave laborers. Gilchrist and Heap are assigned to solve the Brighton murder while a very stupid colleague is switched to Rabbitt’s case, but, refusing to leave Nimue’s fate in his hands, they slyly keep up their investigation into what turns out to be a complex series of deep-rooted crimes.

A masterly procedural with erudite characters and a nasty sting in the tail.

SWIMMING WITH THE DEAD
by Peter Guttridge
Mystery

THOSE WHO FEEL NOTHING
by Peter Guttridge
Mystery

THE THING ITSELF
by Peter Guttridge
Mystery

THE LAST KING OF BRIGHTON
by Peter Guttridge
Mystery