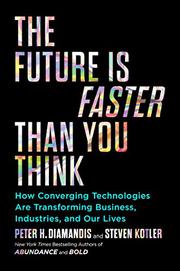 THE FUTURE IS FASTER THAN YOU THINK

An enthusiastic look at the technologies of the future—which is just about now.

Where are the flying cars we were promised as kids? The answer is, right around the corner. “The cars are here,” write Diamandis and Kotler (Bold: How To Go Big, Create Wealth and Impact the World, 2015, etc.). They may be here, but the problem is how to scale them so they can be introduced into the market economically—and how to scale them, physically, to carry human loads. Uber is slated to unveil a flying car in 2020 and has set a target of 2023 for operational ride-sharing in Los Angeles and Dallas. The game-changer, though, is to make the cost of taking such a ride cheaper than owning a car, one example of many instances of “disruptive innovation” and convergence that isn’t just cool, but that also shifts the order of how we do things. Flying cars will disrupt the automobile industry in more than one way, since they’ll not just fly, but also use “distributed electric propulsion,” controlling multiple electric motors by means of a computer. Elon Musk’s Hyperloop train, similarly, is meant to revolutionize long-distance travel by means of a train that will move faster than commercial aircraft. If such innovations seem unlikely, the authors survey the development of artificial intelligence. Only a generation ago, AI couldn’t do much more than “read zip codes off letters,” but now it can now read nearly a quarter-million books in a second to provide an answer to just about any question a human might have—apart from the meaning of life and other such philosophical matters. Diamandis and Kotler are cheerleaders for disruption, the scale and speed of which are increasing. But they’re also realists, noting where there’s more sizzle than steak even when they promise really cool things, like overcoming such problems as “mitochondrial dysfunction” to extend human life.

Welcome reading for the futurists and technogeeks in the audience.

THE RISE OF SUPERMAN
by Steven Kotler
Nonfiction