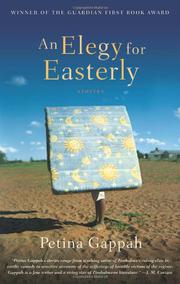 AN ELEGY FOR EASTERLY

Hunger, disease and a worthless currency loom over this varied collection. In the title story, Josephat’s wife believes, after three miscarriages, that his aunts are eating her children. The truth, which involves her unfaithful husband and a pregnant madwoman in their ramshackle township, is almost as shocking. Rich or poor, Zimbabwean men are equally promiscuous. Esther, a South African, calls them “worthless dogs.” In “At the Sound of the Last Post,” she is attending the state funeral of her husband, a hero of the liberation struggle who died from AIDS, which stalks many of these characters. The funeral is a sham: Her husband was a corrupt bigamist who avoided the war. The meaty “Something Nice from London” spotlights a family of professionals dragged down by another useless male. After bleeding his parents dry, ne’er-do-well Peter lies dead in London, and his quarreling relatives await the return of his body in a scintillating black comedy. Elsewhere Gappah dips into the past. “Aunt Juliana’s Indian” shows an Indian shopkeeper/employer in 1979 to be almost as difficult as the whites, while in the effervescent “My Cousin-Sister Rambanai” the ever-adaptable title character, a young immigrant woman, hustles her way in 2002 from Texas to London via Harare, greasing palms back home to get a new passport. “The Negotiated Settlement” dissects a marriage. Thulani wed young and now feels trapped, though occasional flings relieve the pressure. His wife knows what he’s doing, but despite a revenge fling with a fellow teacher, she wants only Thulani. The author gives this unhappy couple a ray of hope at the end, which is unusual here. Frustrated in love, her characters are more likely to consider suicide, as the mental patient in “The Annex Shuffle” does, or to actually kill themselves, like the character in “The Maid from Lalapanzi.”

Searing, but never over the top: Gappah holds the anger and horror in check with exemplary artistic discipline.

OUT OF DARKNESS, SHINING LIGHT
by Petina Gappah
Fiction

THE BOOK OF MEMORY
by Petina Gappah
Newsletter sign-up