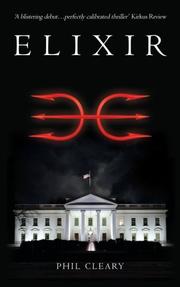 Cleary’s blistering debut sees a pharmaceutical lab create a life-extending compound that, if not properly controlled, could unravel civilization.

In Laguna Niguel, Calif., Tom Shaw is the CEO of Pure Industries, a struggling pharmaceutical lab hungry for products that will ensure its financial stability. Shaw’s private life brings even more worry; his wife is terminally ill, and his 10-year-old son is growing up lonely and depressed. Futures brighten, however, when Shaw’s chief scientist, Rachael Leo, tells him that a lab spill has contaminated a compound called Legum. Originally designed to ease muscle pain, Legum now seems to be halting cell deterioration in mice. Early tests show that a human life could perhaps be extended to about 400 years. But this breakthrough doesn’t go unnoticed: Governmental intelligence networks monitor labs like Pure Industries, and Nathanial Windlass, special security advisor to the president, sees the very existence of Elixir (as Leo has named it) as a threat to national security. There’s also the threat presented by ruthless millionaire Theodore Croft, who’s been tipped off by an insider to Elixir’s potential. He’s willing to maim and murder anyone standing between him and Leo’s secret recipe—which could earn Pure Industries $1.2 trillion. Into this combustible mix, author Cleary adds undercover cop Pat Dolan, who’s infiltrated Croft’s squad of brutal mercenaries. Yet it’s the thought-out, well-crafted premise, not explosive violence, that will draw readers in, as when Shaw describes the world he’d create: “If we play this right, for example, we can offer new-style mortgages, pensions and commodities to suit extended lifestyles.” Equally intriguing are the arguments against life extension, including limited jobs, space and natural resources. Cleary also lucidly presents the science: “Reduced gene expression,” says Leo, “means the production of proteins essential to [converting food into chemical energy] slows down.” Only occasional punctuation gaffes trip up this limber narrative. What this author does best are quick, careful renderings of both the main and secondary characters, especially scenes starring his villain: “Life was too short to be poor. Theodore Croft never would be.”

A perfectly calibrated thriller, memorable for how closely it cleaves to reality.