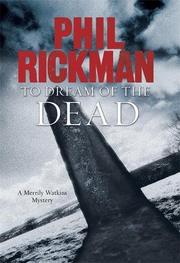 TO DREAM OF THE DEAD

The city council and planning commission agree to excavate the ancient buried stones beneath Coleman’s Meadow and develop luxury housing and a highway, making it easy for posh weekenders to commute to London from Ledwardine, on the Welsh border. But the postmistress, who thinks the stones are pagan artifacts, wants them kept buried, and a group called Children of the Serpent warns that climactic upheaval will ensue if the stones are moved. A major flood suggests that they may be right. The discovery nearby of councilman Clement Ayling’s decapitated head brings DI Francis Bliss to the scene until Acting Supt. Annie Howe, who fears that he’ll uncover clues leading to her father, Charlie, a retired bent copper, shunts him off on a minor drug bust. Young Jane Watkins, daughter of diocesan exorcist Merrily, who first happened on the historical site, is humiliated by Prof. Bill Blore, the self-important TV host preparing the dig site, and dogged by photojournalist Lensi, who recently moved to the village with her husband, an author whom the postmistress describes as spin doctor for the Antichrist. Only Jane, Merrily and Bliss are honest about their motives. The drug bust, the murder and the egotistical posturing unsurprisingly collide, unleashing more death and rampant lust just as the bells ring in Christmas Eve.

As always, Rickman thrives on excess, but readers who take the plunge will enjoy the excellent company of Merrily, Jane, their beaux and DI Bliss (The Fabric of Sin, 2008, etc.).

THE BONES OF AVALON
by Phil Rickman
Fiction

THE FABRIC OF SIN
by Phil Rickman
Fiction

THE REMAINS OF AN ALTAR
by Phil Rickman
Fiction

THE SMILE OF A GHOST
by Phil Rickman
Fiction

THE PRAYER OF THE NIGHT SHEPHERD
by Phil Rickman
Fiction

THE LAMP OF THE WICKED
by Phil Rickman

A BEDLAM OF BONES
by Suzette A. Hill
Newsletter sign-up