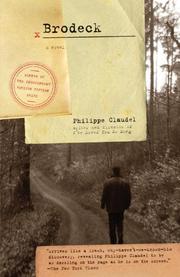 Man’s distrust of strangers, and the primal violence it may engender, is the theme of this fable from French novelist Claudel (By a Slow River, 2006, etc.), which won the Prix Goncourt des Lycéens in 2007.

Much of the action occurs in an isolated mountain village in the European heartland. The time is a convincing fusion of modern and medieval; while there are parallels to Nazi Germany, the peasant villagers belong in a Breughel painting. The eponymous narrator was not born in the village (a key point), but was brought there as a four-year-old war orphan by kindly old Fedorine. Brodeck thrives after that and goes to university in the distant capital, where he meets his true love, Amelia. When the city is torn by anti-foreigner riots, they flee to the village, which Brodeck believes is a safe haven. That’s an illusion. The army occupies the village; Brodeck’s non-native origins are revealed; and he is sent to a death camp with other “foreigners.” Against the odds, however, he survives and returns home. One day, a strangely dressed fellow arrives with horse and donkey. He is benevolence itself, but the ultimate outsider; Brodeck calls him De Anderer (The Other). The villagers’ welcome turns to suspicion when De Anderer refuses to reveal his past; tension mounts, and he is murdered at the inn. Some 40 men participate, but not Brodeck. Claudel constantly shuffles the chronological order and passes up opportunities for suspense as he presses his inquiry into the nature of evil. His insights are not especially original: We are all implicated in wrongdoing, even the gentle Brodeck; remembering atrocities threatens the powers-that-be. Claudel wisely withholds the exact circumstances of De Anderer’s murder. Less is more, just as the quiet moments affirming the purity of Brodeck’s love for Amelia, their child and Fedorine are more resonant than the luridly detailed horrors of the death camp.

THE INVESTIGATION
by Philippe Claudel
Fiction

BY A SLOW RIVER
by Philippe Claudel
Newsletter sign-up