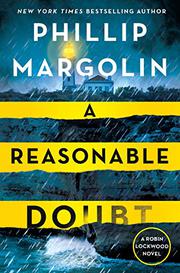 A magician’s greatest illusion becomes even more dramatic when he’s killed onstage in front of 3,000 witnesses.

Lord Robert Chesterfield (don’t look too closely at that presumably self-conferred title) has finally perfected his ultimate magic trick: the Chamber of Death, which involves his escape from a bolted sarcophagus filled with scorpions, snakes, and him. Since Chesterfield’s only public rehearsal for the illusion ended with his vanishing from both the sarcophagus and the face of the Earth for three years, expectations are running high, and the tickets for his performance at the Babylon Casino all seem to have been reserved for everyone the performer has ever crossed. His estranged second wife, Claire Madison, is there, along with her lover, rival magician David Turner, whose professional life took a nose dive when Chesterfield told the world the secret behind Turner’s own trademark illusion. Joe Samuels, one of Chesterfield’s many creditors, is on hand, and although Augustine Montenegro, a harder-edged creditor, couldn’t make it, he’s sent two of his enforcers. Iris Hitchens, who’s never stopped believing that Chesterfield killed her mother, Lily Dowd, the grocery heiress who was his first wife, is watching in rapt attention. So are detectives Tamara Robinson and Lou Fletcher, who’ve come to arrest the magician for theft. There’s hardly room in the crowd for young attorney Robin Lockwood (The Perfect Alibi, 2019, etc.), whose firm defended Chesterfield years ago against the charge of poisoning Sophie Randall, the secretary to Westmont Country Club manager Samuel Moser, who’d accused Chesterfield of cheating at cards and coming on to Sophie and others—and yes, Moser’s in the audience too. It’s clear from the opening pages that the Chamber of Death will be Chesterfield’s last performance; the pages that follow are devoted to filling in the layers upon layers of dubious backstory and multiplying the suspects even further before the guilty party is plucked from thin air.

Lots of tricks up Margolin’s sleeve. Just don’t expect the denouement to bring down the house.