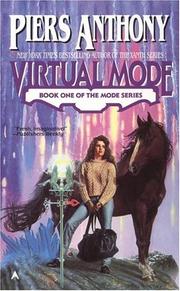 In an interesting mix of sf and fantasy, Anthony examines the effects of parental neglect and sexual abuse against a fantastic backdrop. On her way home from school, Colene, 14, finds Darius in a ditch, beaten and robbed. She shelters Mm and, while teaching him English, also falls in love with him. She doesn't believe him, though, when he reveals he has come from a magic-using reality to find her, and, when she reveals that she is suicidal (with reason), he thinks his love for her mistaken. He leaves, but then both realize they've made an error. Darius can return only by setting up a Virtual Mode, however, a hazardous path that cuts across realities and is accessible only by the five people, each in a separate reality, that form the path's anchors. Colene and Darius are two of those anchors; Provos, a woman who remembers the future; Seqiro, a telepathic horse; and Ddwng, the emperor of the galaxy in his reality, are the other three. Ddwng captures Colene and Seqiro, then Provos and Darius, in order to capture the Chip--the artifact that let Darius create the Virtual Mode--so Ddwng's empire can expand into all realities. Colene's struggle to deal with her past drives the story, but her pain is intellectualized, not felt. Rewarding if you can get past her and Darius's never-ending internal monologues.
Pub Date: Feb. 13th, 1990
ISBN: 0441865038
Page count: 338pp
Publisher: Putnam
Review Posted Online: March 19th, 2012
Kirkus Reviews Issue: Jan. 15th, 1990

LUCK OF THE DRAW
by Piers Anthony
Sci-Fi

HOW PRECIOUS WAS THAT WHILE
by Piers Anthony
Sci-Fi