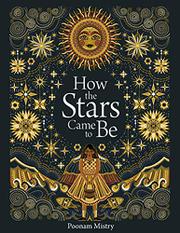 HOW THE STARS CAME TO BE

An anxious fisherman’s daughter and a mischievous monkey fill the sky with stars.

At the beginning of time, only the sun and the moon light the world. The fisherman’s daughter loves the light, not only because of the way it feels on her skin, but also because it safely guides her father home every night. On nights when the moon is absent, though, the fisherman’s daughter weeps until her father returns. Noticing the girl’s distress, the sun throws the girl a ray of light, which shatters into millions of tiny, glimmering pieces that the sun calls stars. Delighted, she starts making careful patterns in the sky, but eventually, she grows tired and overwhelmed. She lets down her guard just long enough for a mischievous monkey to steal her sack of stars—and to create the universe we know today. The luscious, intricately detailed illustrations are rendered in an unearthly palette of blacks, blues, and golds, perfect for the mood and content of the story. The protagonist is a feisty and resourceful girl of color. Unfortunately, the design and the prose are not equal to the pictures. While the story is clever and imaginative, the prose can be clumsy, particularly when it slips into passive voice. The indigo type is small, making it difficult to distinguish from the black background and detracting from the attractiveness of the artwork.

The illustrations of this imaginative modern myth compensate for its flaws. (Picture book. 3-5)

YOU'RE STRONG WITH ME
by Chitra Soundar
Children

YOU'RE SNUG WITH ME
by Chitra Soundar
Children

YOU'RE SAFE WITH ME
by Chitra Soundar
Newsletter sign-up