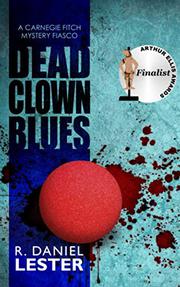 In this 1950s-set novella, an unlicensed Vancouver private eye works a case that entangles him with a traveling circus and thuggish clowns.

Carnegie Fitch has a paying gig lined up involving a potential insurance scam. But another case takes precedence when local circus owner Adora Carmichael hires the private investigator. She wants to know what happened to Jim, a janitor who recently died after drunkenly driving through a circus tent and into a lake. Jim was like an uncle to Adora years ago when he was a clown at her father’s circus. Fitch already has a vested interest in this, as Jim, who worked in the same building as the gumshoe’s office, and the detective traded whiskey shots the night of the man’s death. A few inquiries ultimately lead to the rumor that Adora’s father was a bootlegger and used clowns as his muscle. Known as the Dead Clowns, these mean-looking circus performers are less than cooperative with Fitch. Evidently, Jim stashed some money before a lengthy prison stint, and the Dead Clowns feel entitled to the loot. They’re also convinced that Fitch knows where the cash is, making them especially dangerous, as they’re willing to do whatever it takes to extract information that the lowly PI doesn’t have. Lester’s (40 Nickels, 2019, etc.) sharply written series opener is riveting and persistently witty. It triumphs as a mystery, with Jim’s possible murder and the money that the menacing clowns want. There are also detective story conventions, as Fitch treks seedy streets while donning a fedora. But understated humor layers the narrative as well. For example, Fitch’s apparent lack of effort as a private eye prompts droll visuals, including his office door still carrying the name of the accountant who previously worked there. Like any good gumshoe, Fitch is quick with one-liners, which come easy thanks to the irony-laden, antagonistic clowns plot. A highlight is Fitch’s repeated attempts to relay a joke involving a “plastic sheep,” which no one seems to want to hear.

An absorbing, wry mystery with a charming, rather indifferent sleuth.