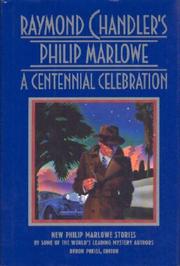 Preiss invited 23 authors to write a short story featuring private eye Philip Marlowe and, unfortunately, all of them agreed: despite their personal afterwards citing Chandler's humor, grace, style, their indebtness to him for their careers, etc., only three writers manage to honor Chandler; the rest merely pander or parody. The exceptions: Jonathan Vallin's "Malibu Tag Team," with a believable larcenous lady, an inadvertent double-cross, and a downbeat resolution that actually has an authentic 1940 tone; Paco Ignacio Taibo II's "The Deepest South," the archetypal misfit story, with a hardedged churl that Chandler would have relished: and Robert Crais' "The Man Who Knew Dick Bong," a tear-jerker father-son relationship complicated by a cynical ex-wife, a robbery that turned sour, and a sentimental bent for Marlowe, a good man. The only other worthwhile story is Chandler's own "The Pencil," which concludes the collection and demonstrates that a strong plot and sharp characterization can only enhance a story. Other contributors include Eric Van Lustbader (purple prose rampant), Simon Brett (uncomfortably macho), Sara Paretsky (outright corny), plus anthology perennials Ed Hoch, John Lutz, Loren D. Estleman, Francis M. Nevins, Jr. Also included are a map of Philip Marlowe's Los Angeles; 25 chapter drawings of varying period success; and an introduction by Frank MacShane, who rehashes what he's done--and done better--so many times before. A serious disappointment, but it'll probably turn up in most Chandler fans' Christmas stockings anyway.
Pub Date: Oct. 12th, 1988
ISBN: 0394573277
Page count: 392pp
Publisher: Knopf
Review Posted Online: March 23rd, 2012
Kirkus Reviews Issue: Sept. 15th, 1988

KILLER IN THE RAIN
by Raymond Chandler
Fiction