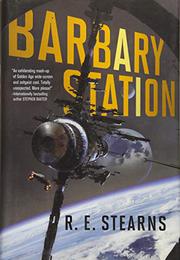 When two young engineers hijack a ship to go join a pirate crew stationed in deep space, they find themselves trapped by a murderous artificial intelligence.

Adda and her girlfriend, Iridian, are young, in love, and ready to start a beautiful life of piracy together. Their solar system is still recovering from a nasty interplanetary war, and the economy is run by insidious megacorporations. Their options are to take soul-sucking jobs that are legal but would keep them apart or join a group of pirates. Lucky for them, Adda’s brother, Pel, is already a member of one such crew, working for Captain Sloane. Pel urges Adda and Iridian to join him and the crew on Barbary Station, and between Adda’s knack for the AIs that run ships and Iridian’s engineering prowess, they manage to hijack a ship to take them there. But when they board the station, they find the pirates barely surviving. As it turns out, the pirates are being held hostage by the station’s killer security AI. When Adda confronts Pel, he admits that he was hoping that Adda could use her AI expertise to rescue them. Now that she and Iridian are trapped, too, she has no choice but to try. Fans of harder SF will appreciate Stearns’ attention to detail, but sometimes all that specificity is overwhelming. Still, there is solid buildup to Adda’s intense confrontation with the rogue AI, with which she interacts by literally plugging herself into the station’s network via neural implants. Adda shares the narrative with Iridian, and while Adda studies the AI in a virtual space, Iridian’s chapters deliver the physical action and adventure you’d want from a space pirate story.

GRAVITY OF A DISTANT SUN
by R.E. Stearns
Sci-Fi