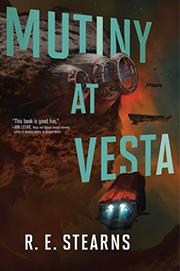 Adda, Iridian, and their pirate friends escape a killer artificial intelligence only to fall prey to an insidious corporation.

Finally free of Barbary Station and the rogue AI that trapped them there in Barbary Station (2017), Captain Sloane leads the crew, Adda and Iridian included, back to the pirates’ home base on Vesta. Adda and Iridian asked the Captain to officiate their wedding, and they’re excited to start spending their pirate booty. Expecting a hero’s welcome, they are instead met by representatives of Oxia Corporation, which took over the minor planet in Sloane’s absence. Oxia coerces the crew into running some errands, like stealing a massive printer, hijacking a prototype ship, and forcing an astronomer to sign an Oxia contract. Meanwhile, Adda discovers that the AI from Barbary Station, AegiSKADA, is alive (so to speak). It’s less powerful and under Adda’s control but still dangerous. Adda, an AI specialist, knows she should just shut it down, but she’s too tempted by what she could learn from it, and she decides to keep AegiSKADA a secret. Eventually the pirates figure out why Oxia wanted that printer, ship, and astronomer, and the secret is big enough that the pirates may be able to use it to their advantage. But Adda and Iridian may not be able to trust Captain Sloane, and the strain of keeping AegiSKADA under control is getting to Adda. Oxia’s tasks provide plenty of excitement, like when the pirates steal not just the printer, but the entire lab housing it. The virtual space where Adda interacts with the AI is inventive and makes those passages easier for readers to parse. The characters mostly take a back seat to the action, but the ending sets up a compelling premise for the upcoming third novel.

GRAVITY OF A DISTANT SUN
by R.E. Stearns
Sci-Fi