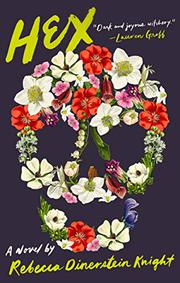 A tale of poison and obsession set amid the toxic halls of academe.

Expelled from her graduate program in biological science after a lab-mate dies, a victim of the group's toxicological experiments, Nell Barber is left obsessed and unmoored. Though once she’d been focused on oak trees, she is now consumed by the need to finish the dead girl’s project to “neutralize botanical toxins,” to combine the poison and its antidote. Now it is Nell’s mission, working alone in the exile of her Brooklyn apartment, to build “a poison that undoes itself.” Yet it is not the work that is at the heart of her obsession but her mentor, Dr. Joan Kallas. The novel itself is a series of journal entries, all addressed to her absent beloved. “As with the old work, the new work is for you, Joan,” Nell writes. “What isn’t for you?” The rest of Nell’s world is populated with Joan-adjacent players. There is Joan’s husband, Barry, the self-important and useless Associate Director of Columbia Undergraduate Residence Halls—less a threat to Nell than a man-shaped afterthought—and Nell's two best friends, Tom and Mishti, who, as students in good standing, still have access to the privilege of Joan’s presence, both enrolled as nondepartmental students in her class. Mishti is a beautiful chemist; Tom is a beautiful medieval and Renaissance historian and also Nell’s ex-boyfriend. Soon, all six of them are intertwined, a web of sex and betrayal, with Joan (always) at the center. It is a lush and brooding novel, over-the-top in its foreboding, with Dinerstein Knight (The Sunlit Night, 2015) walking the delicate line—mostly successfully—between the Grecian and the absurd. As a string of weirdly mannered sentences, it is a joyfully deranged pleasure; as a novel, though, the experience is frustratingly hollow, populated by characters who only come to life in the book’s final third.

Admirably bold if sometimes hard to care about.