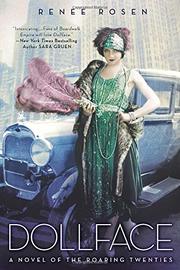 A flapper marries into Chicago’s North Side mob shortly before that gang challenges Al Capone’s South Siders for control of Chicago’s rackets.

Vera Abramowitz, young, Jewish and determined to escape her mother, moves into a boardinghouse and gets a job as a typist, as does her friend Evelyn. Although Evelyn’s origins are solidly middle class, Vera had a brush with Chicago-style crime early on: Her mother took over Abramowitz’s kosher meatpacking plant in the Stock Yards after her father was killed by the notorious Black Hand mob. The friends bob their hair, frequent speak-easies and soon attract gangster boyfriends. For a while, Vera is dangerously seeing both handsome gambler Tony, a Capone henchman, and affable, refined Shep Green, a nightclub owner and kingpin of the North Side gang. When Vera becomes pregnant, Tony absconds, and so she persuades Shep to marry her. Shep’s associate Izzy slaps Evelyn around, and when Vera confronts him, he insinuates that he knows about Tony. Aside from the occasional bullet hole in the ceiling of her opulent new home and foulmouthed gangsters interrupting her Women’s Jewish Council meetings, Vera settles comfortably into marriage to the mob, Roaring ’20s–style. Her support system now includes, besides Evelyn, Basha and Dora, two self-professed gun molls who show the greenhorns the ropes. When Vera witnesses the torture of an underling by Shep and his boss, Dion, she almost leaves, but the birth of daughter Hannah and her luxurious surroundings paralyze her resolve. After Dion is bumped off by Capone’s men, hostilities between the two mobs escalate rapidly. The novel gets off to a slow start as Vera hovers on the fringes of Shep’s world; it isn’t until a third of the way in, as Vera’s dilemma deepens, that narrative tension heightens. Clearly, Rosen, a Chicagoan, has done her research to bring this world to life, but the period ambience is disrupted at times by anachronisms like “rethink” and “updated.”

Once it finds its stride, this novel achieves a breathless finish.

THE WETTEST COUNTY IN THE WORLD
by Matt Bondurant
Fiction

The Lie They Told
by Jean S. Arbeiter
Newsletter sign-up