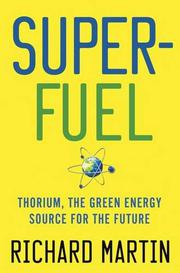 The story of the slightly radioactive element thorium, a much-touted alternative fuel for nuclear power plants.

Abundant in the Earth’s crust, thorium has been used in various industrial processes since its discovery in 1828. Advocates, writes Martin, an award-winning journalist and editorial director for Pike Research, a clean energy firm, say the silver-gray element has another possible use: as an cheap, safe energy source with the potential to “solve our power crisis.” Expanding on his Wired cover story, the author explains that the element was actually used as a nuclear fuel in an experimental reactor built and run by American scientists at Oak Ridge in the late 1960s. Since then, it has become a forgotten technology, losing out to uranium, which powers all reactors operating in the United States. In the wake of Japan’s recent Fukushima Daiichi disaster, many scientists and entrepreneurs are now seeking U.S. government and corporate backing of thorium, which has become the fuel of choice for nuclear energy efforts in India, Japan and elsewhere. Martin focuses on the work of Kirk Sorensen, a former NASA engineer, now head of Flibe Energy, who urges U.S. utilities that are preparing to replace some 30 older reactors to build a new kind of reactor—a liquid-fluoride thorium reactor, which proponents consider to be more efficient and safer than existing plants. He describes how uranium-based nuclear reactors came to dominate the nuclear industry and how industry leaders are now thwarting the use of thorium power, while conceding its possible advantages. They complain of the high costs associated with converting to the alternative energy source. Martin also details Asia’s enthusiasm for thorium power and its implications for reducing reliance on fossil fuels and slowing climate change.

A lucid overview of a still-developing chapter in the story of nuclear power.

POWERING THE FUTURE
by Robert B. Laughlin
Newsletter sign-up