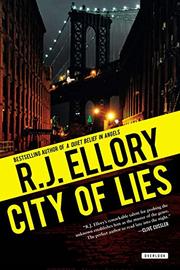 An operatic, excessively serious thriller about an angry, feckless, blocked writer lured back to New York City to learn that there is more, much more, to his past than he thought.

The most verbose gangsters that ever lived populate Ellory’s latest novel (A Quiet Belief in Angels, 2009, etc.). The story has more plot points than a star map. John Harper has a lousy job with the Miami Herald. He’s written one book and can’t figure out how to write more. About to go on assignment, he’s called back to the office. Evelyn Sawyer, the aunt who raised him, calls to tell him his father has been shot—the father who left the family when John was 2. He flies to the Big Apple, and Aunt Evelyn starts the "everything you know is wrong" story. Turns out, John’s absent father is the underworld big shot Edward “Lenny” Bernstein. While visiting his father in the hospital, Lenny wakes up in the ICU long enough to tell John to leave, and John meets Frank Duchaunak, a haunted NYPD detective long obsessed with Lenny and his dark doings. Soon, Walt Freiberg and his femme fatale sidekick Cathy Hollander are squiring John around the city, buying him clothes, putting him up in a posh hotel, calling him “Sonny.” Walt was a sort of uncle to John back in the day, before he left for Miami. Things get curiouser and curiouser. Bodies pile up. John ends up “caught between darkness and its shadow.” The action is brisk and bloody. But John and a half dozen other characters must have their identity crises, and they talk the reader half to death.

If garrulous gangsters appeal, this is the thriller for you.

A SIMPLE ACT OF VIOLENCE
by R.J. Ellory
Fiction

THE ANNIVERSARY MAN
by R.J. Ellory