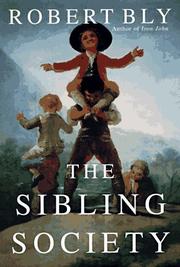  Following Iron John's (1990) mythopoetic men's-movement guide, Bly's new jeremiad turns to broader issues of children and parents, excoriating the modern world as an adolescent culture lacking parental supervision. Bly's ``sibling society,'' formed by ``junk culture . . . early and shallow sexuality, destruction of courtesy . . . economic uncertainty,'' sacrifices mythic symbols for literal information, with children the first victims of this denatured environment. ``Adults,'' Bly writes, ``regress toward adolescence; and adolescents--seeing that--have no desire to become adults.'' This tattered society is, he suggests, the puerile heir to the overthrown, emotionally bankrupt patriarchy. Bly, playing at punditry, predicts a catastrophic downward shift in values unless we identify the proper way to rear children and unless we ``half- adults'' become truly mature. He salts his call to action with citations from New York Times articles and sundry statistics on education, crime, and the economy. In fact, The Sibling Society often sounds more like Bob Dole, Anna Quindlen, or even Ross Perot than Iron John. As in that earlier work Bly turns to myths and poetry both to illustrate our predicament (an elaborate reading of Jack and the Beanstalk focusing on the Giant's ungoverned appetite) and to suggest an alternative model for father-son relations (the Hindu myth of Ganesha's creation). Bly also liberally borrows from feminists, such as Jean Baker Miller and Mary Pipher, to fashion his vision of a healthy environment for maturation and intimacy, for fathers and mothers, daughters and sons alike. There are stops along the way to settle scores with radical feminists and the cowboy cult of inarticulately stoic masculinity, among others. Bly, having identified what children need--``Stability . . . advice, good psychic food, unpolluted stories,'' as well as clear rites of passage and access to the great outdoors--offers some specifics on how we should go about providing these necessities. Urgent, impassioned, with (potentially) wide appeal, but Bly's myth-patterns jar with his newly adopted news-magazine style of statistics and commentary.

THE MAIDEN KING
by Robert Bly

Natalie and the Night Sky
by Carolyn Dibb
Newsletter sign-up