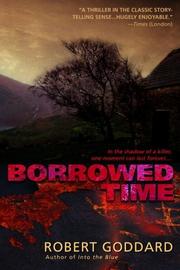 Suave Goddard, who’s been absent from American bookstores since Caught in the Light (1999), returns with a preposterous tale of murderous intrigue, first published in the U.K. in 1995.

Pressed to resign his position with the European Commission and take his late brother Hugh’s place as a director of the family firm, which manufactures cricket bats, Robin Timariot sets off on a week’s walking tour to think things over. One evening he encounters a lovely stranger on a deserted West Mercian ridge. They exchange a few pleasantries; he declines her offer of a ride to a nearby village; they go their separate ways; and that’s the last believable incident for the next three years. Returning to his family after a week virtually incommunicado, Robin learns that shortly after they parted, the stranger, Lady Louise Paxton, was raped and strangled at the home of well-known painter Oscar Bantock, who was strangled as well. The police announce that they’ve made an arrest, but Robin can’t resist responding to their search for possible witnesses. His testimony, and the details he unwisely shares with the Bantock and Paxton families, pull him slowly but irresistibly into the center of the case. Goddard’s plotting is as sleekly malevolent as ever; before the seventh corpse falls to the ground, nearly every cast member, from Hugh’s widow Bella to Louise’s widower Sir Keith Paxton to Shaun Naylor, the police suspect, has revealed layer upon layer of treachery and deceit. Yet the plot ends by swallowing up the characters, especially Robin, who seems at every point to choose exactly the course of action best calculated to land him in deep trouble for no better reason than that the tale requires it.

Connoisseurs of wheels within wheels won’t be disappointed. For the rest, the inveterately self-serving pettiness of everyone in Robin’s circle is the most realistic touch here.

THE ENDS OF THE EARTH
by Robert Goddard
Fiction

THE CORNERS OF THE GLOBE
by Robert Goddard
Fiction

THE WAYS OF THE WORLD
by Robert Goddard
Fiction