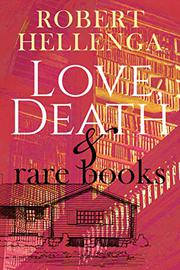 Hellenga’s episodic novel traces the fortunes of a family-owned bookshop and the lives it touches.

Chas. Johnson & Son, Ltd., a purveyor of used and collectible books, is a pillar of its Hyde Park neighborhood, near the University of Chicago. Gabriel, the third generation of the Johnson book dynasty, begins work as a teenager in the shop alongside his grandfather Chaz and father, Charles Jr. Beginning in 1970, in each chapter the action jumps ahead by days, months, or years. We learn about the rare book trade, auctions, the appraisal process, and the escalating price wars as private collectors passionate about books are outbid by billionaires seeking just another trophy. Milestones in American bookselling are checked off. Johnson’s is one of the many bookstores to be bombed for stocking The Satanic Verses. The juggernaut of big-box bookselling rolls over independent stores—and then comes Amazon—but, still, Johnson’s endures. Only the increasing movement of the collectible book trade to online sales deals the death blow. Meanwhile, Gabe grows up and grows older. His mother deserted the family long before; and his first love, Olivia, deserts Gabe for Yale, where an affair with a professor leaves her pregnant. Olivia will return to give birth to daughter Saskia and, later, to manage the Hyde Park Borders store, but whenever Gabe’s romantic hopes rise, she dashes them. Now in his 50s, Gabe, who has never married, sells everything and buys a house teetering on a bluff overlooking Lake Michigan. Then Borders’ bankruptcy and Olivia’s own belated maturity take a hand. Partly owing to a supporting cast of colorful eccentrics, including Father Gregory, desperate to unload the library of a defunct Catholic college; Delilah, scion of a funeral home chain; and Augie, a garrulous elderly former gangster, the story ambles along amiably, never failing to instruct and, somewhat less often, entertain. Gabe never fully emerges as a character since his role is principally that of a spectator to the lives of others as well as his own.

A novel with the feel of a rambling memoir.

THE CONFESSIONS OF FRANCES GODWIN
by Robert Hellenga
Fiction

THE FALL OF A SPARROW
by Robert Hellenga

THE BOOKSHOP OF YESTERDAYS
by Amy Meyerson
Fiction

THE BOOKSHOP AT WATER'S END
by Patti Callahan Henry
Nonfiction

THE LOST FOR WORDS BOOKSHOP
by Stephanie Butland
Newsletter sign-up