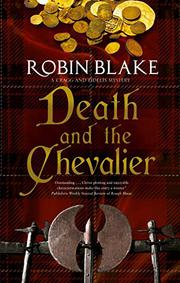 DEATH AND THE CHEVALIER

A coroner finds himself in hot water when the forces of Charles Edward Stuart, pretender to the throne, invade England in 1745.

The populace in the Preston area, where coroner Titus Cragg lives, is split between Jacobite supporters of the Bonnie Prince and Hanoverians who support the German George, but both are fearful of being caught up in a war. A constable calls Cragg and his friend Dr. Luke Fidelis (Rough Music, 2019, etc.) to a rural area where a naked headless body has been discovered. Soon enough, they find a head, but it doesn’t go with the body. After discovering a second head and body, Fidelis deduces that the men were Highlanders, perhaps advance scouts. It’s a ticklish case in which the law is murky and their only clue a bit of a tartan. The dead men may have been visiting Barrowclough Hall, home to a father and son with violently opposed political views. After the younger Barrowclough and his servant, Abel Grant, deny any knowledge of the incident, the jury reaches a verdict of death by an unknown hand. The discovery by one of Cragg’s law clients of a purse filled with gold coins involves Cragg in a dangerous situation when the client is killed and his housekeeper accuses the Scots. Then the arrival of the rebel army forces Cragg to house some of the leaders, including the Marquis d’Éguilles, whom Cragg catches trying to rape his wife, Elizabeth. Cragg’s problems grow as he’s arrested for killing the headless Highlanders, escapes with Fidelis’ help, and becomes embroiled with a famous highwayman who claims that the purse full of gold coins is his. It will take all of Cragg’s skills and a bit of luck to uncover the links among all these mysteries and save himself and his family from disaster.