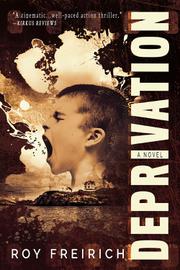 In this cinematic thriller, crippling insomnia infects the tourists and residents of a small town following the appearance of a mysteriously silent orphan.

Like most out-of-balance tourist towns that bustle a few months out of the year, Carratuck Island is heavy with “the uneasy tolerance between sulky islanders trapped in service jobs and finicky, demanding tourists who have planned and saved for a few days of having their way, right now and just so.” It’s also a place of rampant mobile-device addiction. Blank-faced tourists bathe in the glow of iPads rather than sunsets. Tensions in town come to a boil when locals and tourists begin losing sleep and take desperate measures to turn themselves off with some sleep. Freirich (Winged Creatures, 2008) favors a wide shot, and this cinematic follow-up to his successful debut novel (which was turned into the 2008 film Fragments) unfolds in multiple perspectives. Sam Carlson, once a hotshot Boston psychiatrist and now haunted by a patient’s suicide, has worked as a physician on the island for a year, his job consisting mostly of treating “the heaves from a bad steamer clam, or alcohol poisoning.” When an expressionless child appears, addicted to a handheld video game and marred by some unknown grief, Sam attempts to find the boy’s parents in addition to battling his own guilt; he’s in an increasingly hallucinatory state of mind. Meanwhile, Cort, a Twitter-addicted adolescent, has ditched her clueless mother to smoke pot with a surfer boyfriend. The most fascinating character of the bunch, she plays a curious sort of game in which the participants must tweet every 15 minutes for 43 straight hours. It’s a solid if somewhat heavy-handed metaphor: “The billions of synapses of our brains finally become like the binary bits of all we listened to or looked at, on/off, awake or dead, no in between.” The writing can be somewhat preachy, though the shifting point of view and long passages of action—such as a sequence in which the police chief wanders the beach in the rain—seem easily translatable to the screen.

A well-paced action thriller with a wide-eyed premise that works hard to shake readers awake.