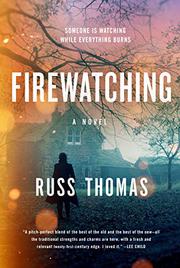 A Yorkshire detective untangles an old murder and new arsons.

DS Adam Tyler, a cold-case investigator for the South Yorkshire Police, is a bit of a loner, but his boss wants him to network more so he lets Sally-Ann, one of his civilian colleagues, talk him into joining a pub evening with the South Yorkshire Police LGBT Support Network. He doesn't plan to stay long, and when he meets a handsome man at the bar—"Sweetheart, he was everyone's type. Even mine," Sally-Ann says—he abandons the group to go home with him. The next morning, when he gets to work, Sally-Ann tells him there's big news: The body of Gerald Cartwright, a local tycoon and shady character who disappeared years ago, has been found in the basement of his own house during a renovation ordered by his 21-year-old son, who'd just inherited it. Tyler manages to get himself assigned to the investigation though the detective who's been working on it since Cartwright's disappearance doesn't want to hand it over to cold cases; he soon discovers the identity of his one-night stand: Oscar Cartwright, son of the deceased and potential suspect, which further complicates his position. Meanwhile, Edna and Lily, elderly Cartwright retainers of various duties, have begun receiving unsettling anonymous letters, and the whole community is rattled by a series of arsons that seem more and more likely to be related to the discovery of Cartwright's body. As Tyler's investigation slowly uncovers a sordid history of manipulation and abuse, the violence increases and he is assaulted several times. The repetitive nature of these assaults is a weakness in the book, but the richness of Tyler's character and the vividness of his negotiation of his own sexuality and the casual bigotry in his community are effective. The subsidiary characters are lively and believable, the arsons are particularly well described, and though the plot sometimes seems gratuitously complex, this is a rewarding entertainment.

A good detective in an incendiary procedural.