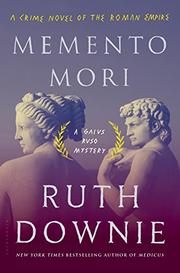 In ancient Rome, a busy doctor and sometime sleuth puts himself at risk to save an old friend from a trumped-up murder charge.

The year is 123 C.E. Physician Gaius Petreius Ruso is interrupted mid–sheep butchering by the news that Serena, the wife of his fellow doctor and friend Valens, has been stabbed to death and Valens arrested for the crime. Reports of discord in the marriage are common knowledge, shared by Ruso and his wife, Tilla, in private conversation. After going to the sacred spring where Serena’s body was found floating, Ruso visits Valens, who blames his incarceration on his father-in-law, Pertinax, a retired centurion who’s never liked him. Strangely, on the same night that Serena was killed, Terentius, her presumed lover, disappeared. Valens makes things even harder on himself and Ruso when he goes on the run and a reward is placed on his head. Unsure how to proceed, Ruso naturally turns to Tilla, who’s long played Nora Charles to his Nick in seven previous whodunits (Vita Brevis, 2016, etc.). Witnesses tell Ruso of a fire that directly preceded (or covered up?) Serena’s murder and of Valens’ calm demeanor during this crisis. Tilla, meanwhile, gets an earful about Pertinax’s concerns over an heir and Serena’s presumed lover. If Valens is as innocent as he seems, who’s guilty? And why did the good doctor go on the run?

As usual, Downie can be relied on for crisp, balanced prose and a sharp eye for historic detail. The inclusion of a map, period quotations, and a cast of characters not only aids armchair detectives, but enhances authenticity.

THE WOLF AND THE LAMB
by Frederick Ramsay
Newsletter sign-up