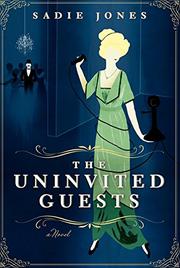 Jones (Small Wars, 2010, etc.) quickly establishes a tension-riddled scenario. Charlotte Torrington Swift is in danger of losing Sterne, the grand manor bought for her by her adoring first husband, who couldn’t afford it and died leaving a pile of debts. Second husband Edward is off to Manchester to try and save Sterne—not that this wins him any favor from petulant Clovis and Emerald, who have never liked their stepfather. Edward will miss Emerald’s 20th birthday party, to which childhood friends Patience and Ernest Sutton have been invited; spoiled but good-natured Emerald worries that the clever, unfashionable siblings will be rudely treated by her ill-tempered brother and their status-obsessed mother. Circumstances become even more unpromising with the arrival of survivors of a terrible crash on the nearby branch line, whom the Great Central Railway informs Charlotte will have to be hosted overnight. There’s something very odd about these passengers, and odder still about Charlie Traversham-Beechers, another survivor and an old acquaintance of Charlotte’s, though she’s clearly alarmed to see him. Traversham-Beechers is invited to the awkward birthday dinner, while housekeeper Florence Trieves struggles to find food for his increasingly rowdy fellow passengers. He uses a self-invented game, Hinds and Hounds, to encourage the airing of everyone’s unpleasant opinions about each other, and the game ends with Traversham-Beechers’ ugly revelations about Charlotte’s past. At this point, what seemed to be a savage comedy of manners takes a 90-degree turn and becomes a supernatural confection. There’s no question about Jones’ skill—the novel is cleverly constructed and written in smooth prose. It’s quite a step down in ambition and moral seriousness, however, from her two previous novels. The nasty climax to Hinds and Hounds, obviously intended to make a statement about the human capacity for evil, has its impact muffled by the deliberately implausible happy ending, modeled on a Shakespearean romance.

A peculiar change of pace for this gifted author.

THE SNAKES
by Sadie Jones
Fiction

THE OUTCAST
by Sadie Jones

EVERY CONTACT LEAVES A TRACE
by Elanor Dymott
Fiction

THE REMAINS OF THE DAY
by Kazuo Ishiguro
Fiction