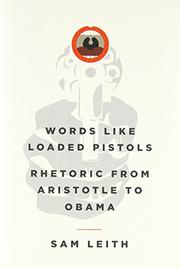 “What is democracy,” asks the author, “but the idea that the art of persuasion should be formally enshrined at the center of the political process?” The art and science of persuasion, so central to politics, the law, literature, love and, indeed, human society itself, has fallen on hard times. Once the capstone of the triumvirate—grammar, logic, rhetoric—that formed the basis of a liberal education, rhetoric is now seen as something to be distrusted, and its place in the academy has been supplanted by upstarts like critical theory and linguistics. Leith uses every tool in the rhetorician’s arsenal to argue for rhetoric’s continuing relevance (even disdain for rhetoric is a transparently rhetorical device, for “the most effective rhetoric is often the least obviously rhetorical”). His contention that “[e]xplaining rhetoric to a human being is, or should be, like explaining water to a fish” is somewhat belied by his use of extensive use of such terms as pleonasm, hypallage, enargia and zeugma. However, persistent readers will gain a great deal of insight into how humans use communication to get what they want. With chapters on each of the five parts of rhetoric and the three branches of oratory, and spotlights on “champions of rhetoric” from Satan to Obama, the book fulfills Cicero’s three objectives of rhetoric: “to move, educate, and delight.”

THE LOGIC OF LIFE
by Tim Harford
Nonfiction

THE SUBSTANCE OF STYLE
by Virginia Postrel
Newsletter sign-up