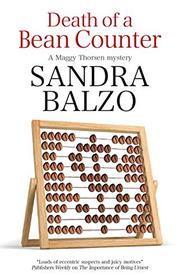 DEATH OF A BEAN COUNTER

Maggy Thorsen (Murder à la Mocha, 2019, etc.) must save her barista from a murder charge.

Free spirit Amy Caprese is very much her own woman. It surprised her boss, Maggy, and Maggy’s business partner, Sarah Kingston, to see Amy date staid attorney Kip Fargo, and it surprises them again to hear that Amy turned down a proposal from the much older financial adviser. But it’s Amy’s turn to be shocked when Maggy’s fiance, Sheriff Jake Pavlik, comes into Uncommon Grounds to tell the three women that Kip’s been found shot to death in his bed. It’s a long, strange journey from there, with Maggy walking a fine line between breaking faith with Pavlik by sharing too much information about the investigation with Amy and letting her employee down by allowing her to be railroaded into a possible murder charge—a charge that doesn’t even make that much sense since Amy had no reason to want to kill Kip; it’s the murdered Kip who was angry with Amy. But the absence of other suspects makes the police bear down on the one person they know quarreled with Kip right before his death. And Amy’s sudden reunion with her old flame Jacque Oui looks sketchy, although again, not really a motive for murder. As Maggy pokes more deeply into the Fargo household, which includes Kip’s grown children, Jason and Jayden, frog-obsessed gardener Rafael, and Mrs. Gilroy, a housekeeper straight out of Daphne du Maurier, she has more reason to believe that Kip is not the solid financial citizen he seemed to be.

Not an espresso or a caramel latte—just a regular American cuppa Joe.

MURDER ON THE ORIENT ESPRESSO
by Sandra Balzo
Mystery